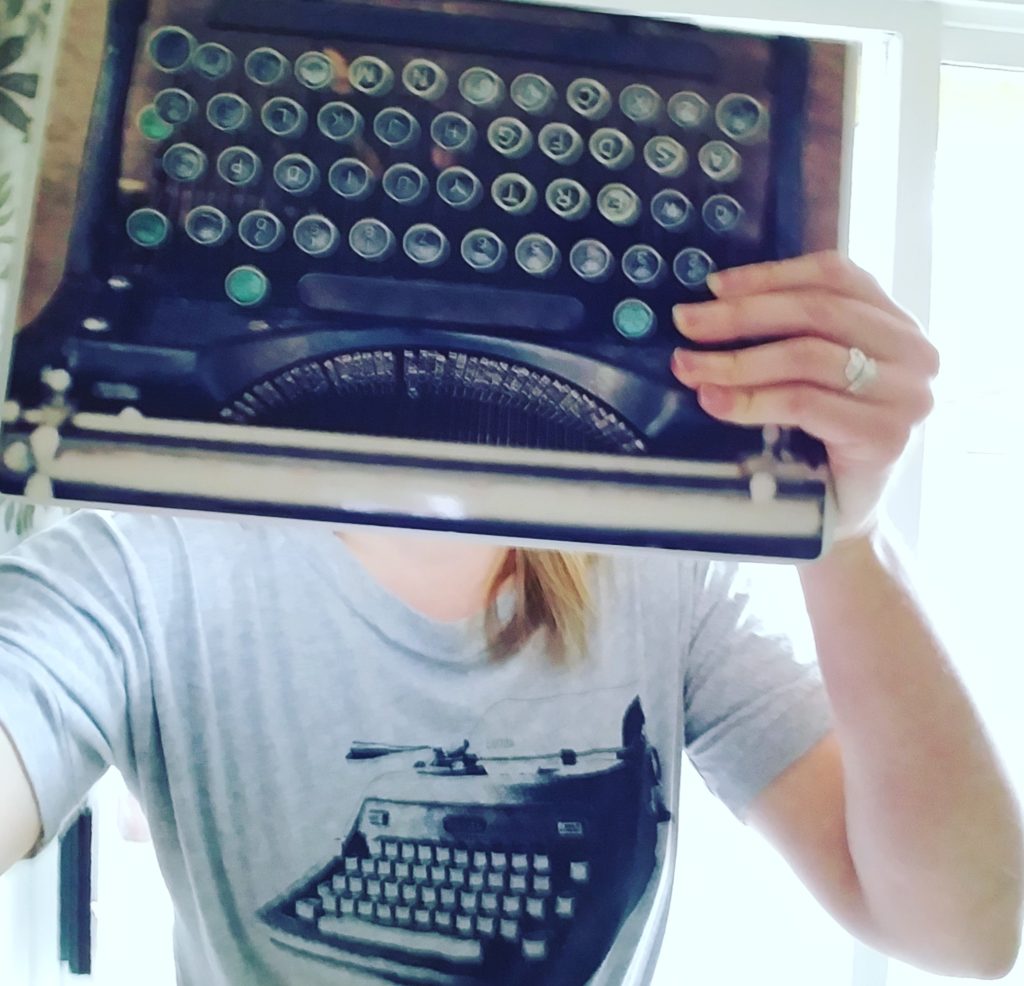 Brain blockage. I’ve been there time and time again. Festering thoughts getting in the way of productivity. Then there’s the hurdles life throws our way for extra shits and giggles. In the past eight years, we’ve lived in four different states and moved seven times. Now we have to move yet again.

With the real world consistently interfering, here are my 3 best go-to tips for keeping focused and creative. 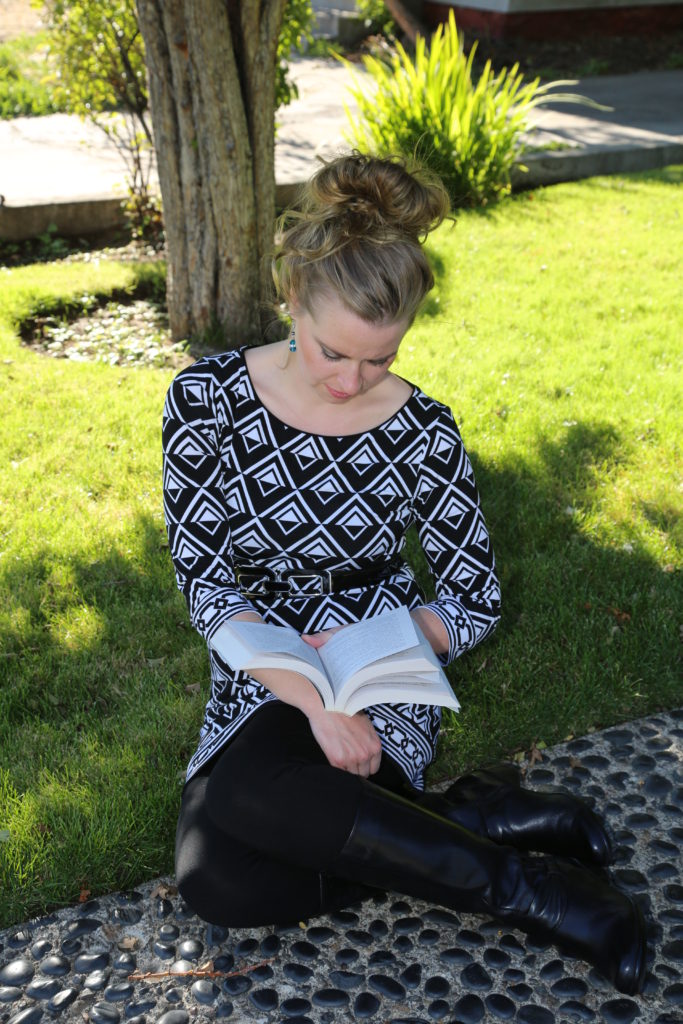 You wouldn’t expect to speak a second language without also listening to the words. Storytelling, like language, is a unique form of communication. The more you listen and read, the more natural it becomes.

Crafting a catchy opening page has been a lifelong challenge for me. I can spend days, weeks even, working on a book’s first paragraph.

Whiteout, Aurora Sky, Vol. 5, gave me particular hardship. So I turned to White Fang by Jack London. Not only did reading the book help put me in my own book’s climate (an Alaskan winter), but the chilling opening inspired me to raise the bar on my own. 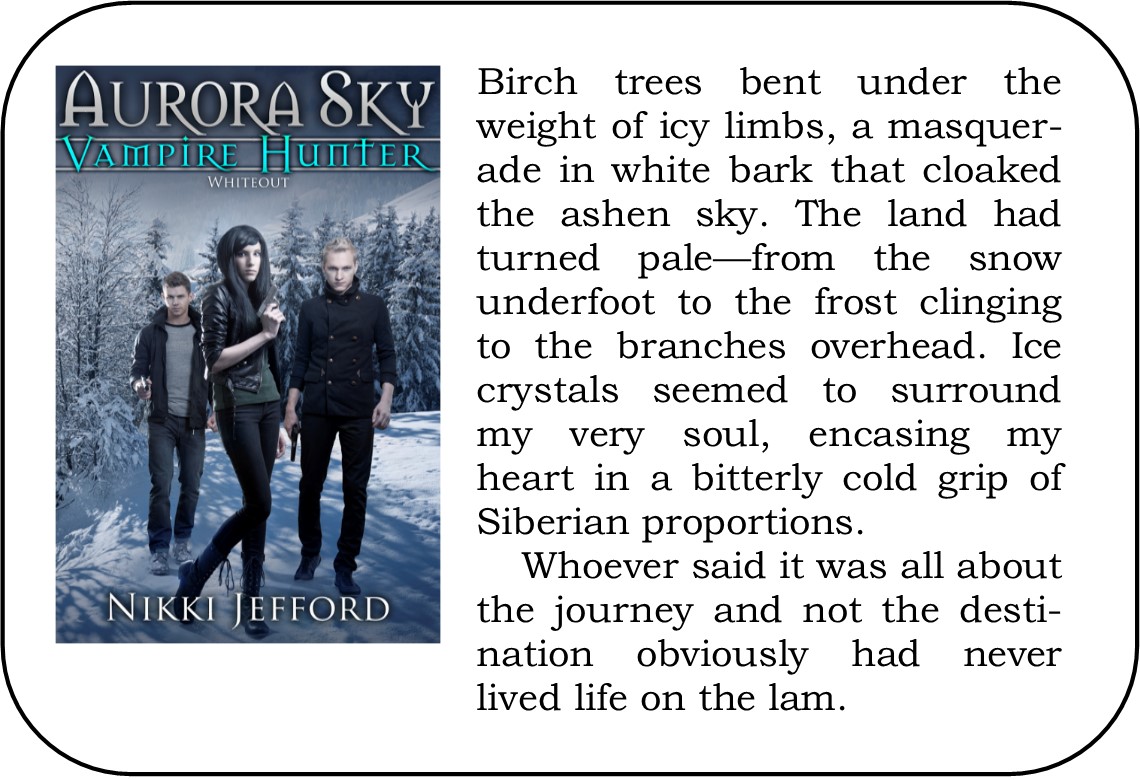 The other challenge Whiteout presented was that while my main character, Aurora Sky, was on the lam, lots of crucial events were unfolding behind the scenes. If only I could tell part of the story from Fane’s POV. But the first four books in the series were solely first person: Aurora’s. I agonized that suddenly giving Fane a POV would throw readers off.

Sometime while debating the issue in my head for the zillionth time, I sprained my ankle and had six weeks of keeping off my foot and allowing it to heal properly (unlike the first time I sprained it).

While couchbound, I decided to catch up on the Lux series by Jennifer L. Armentrout. As I read book 4, Origin, I noticed that suddenly Daemon had first person POV scenes. It flowed naturally and added to the story, especially with Katy and Daemon being separated.

Reading Origin made me realize that there is no set rule that says just because you start a series from one character’s POV you can’t add in others along the way.

Adding Fane’s chapters solved many plot problems I was having. They were also my favorite to write. Most telling of all, after Whiteout released, readers messaged to tell me how much they loved the addition of Fane’s POV. 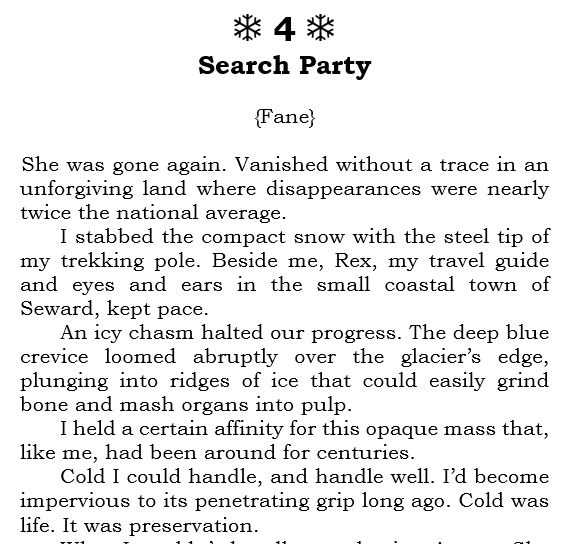 Everyone gets this one. The challenge is to make health a priority. As with writing, it’s crucial to get into a daily routine.

Benefits not only the body, but the brain! Sharpen your mind, lift your mood, combat stress and sleepless nights. Need extra motivation? I highly recommend reading SPARK: The Revolutionary New Science of Exercise and the Brain by John J. Ratey.

This one is so important it deserves its own post. Instead of recounting my own struggles, pitfalls and triumphs, I’m going to recommend more books since I believe reading is the answer to everything. 😉 My favorite motivational reads: You Are a Badass: How to Stop Doubting Your Greatness and Starting Living an Awesome Life by Jen Sincero; The 10X Rule: The Only Difference Between Success and Failure by Grant Cardone; Reinvent Yourself by James Altucher; Singletasking: Get More Done—One Thing at a Time by Devora Zack; and The Miracle Morning for Writers: How to Build a Ritual That Increases Your Impact and Your Income (Before 8AM) by Hal Elrod. 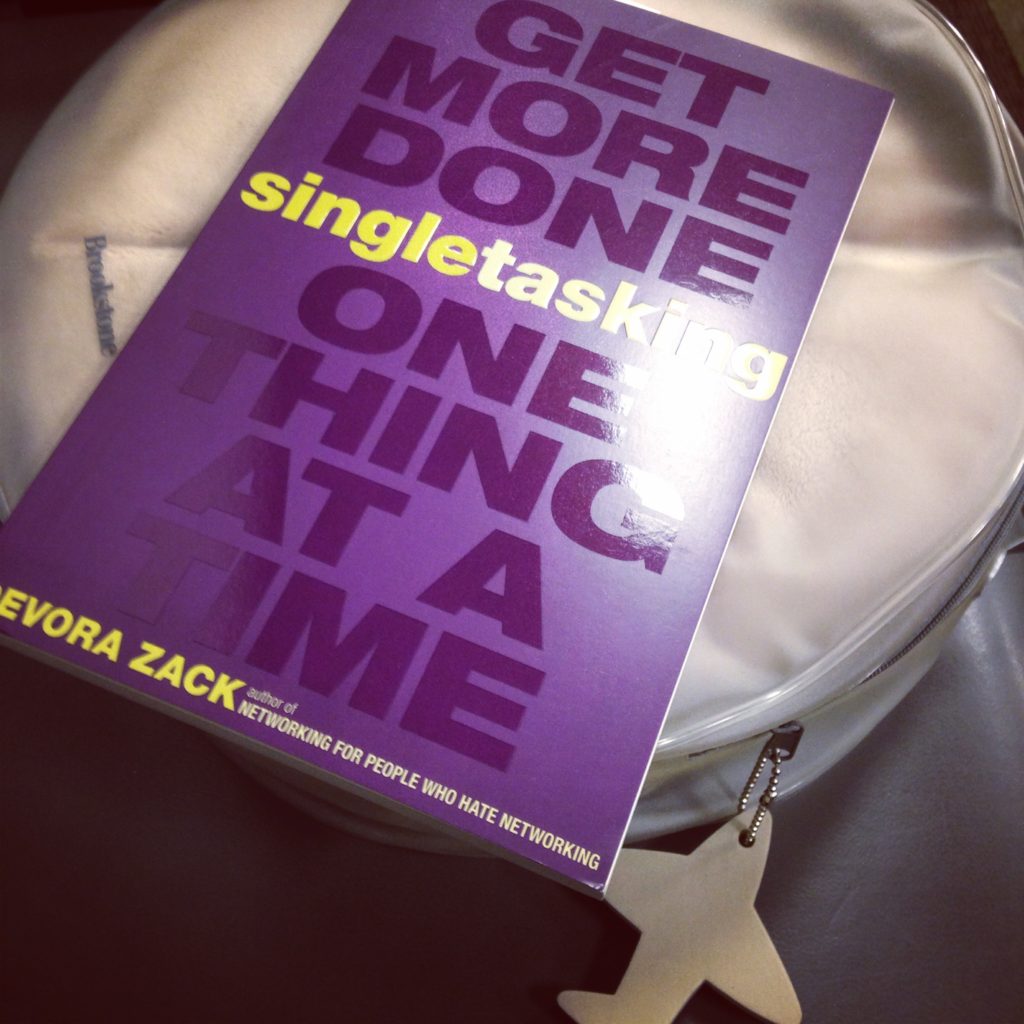 I’m a foodie. Watching my weight is a constant struggle. I’ve been a vegetarian since the 90’s and have eaten mostly vegan for the past decade. But I love bread, fried foods, and dessert. Even when I’m overweight (darn you bread, cookies, and French fries!) I always make an effort to eat plenty of healthy foods. I’m in love with the Magic Bullet from NutriBullet. In addition to the ease of whipping up super smoothies and being easy to clean, it comes with a glossy little recipe book that includes tasty soups, salads, and wraps. I could fill entire bookshelves with all my cookbooks. The one I’ve been using the most lately is Oh She Glows Every Day: Quick and Simply Satisfying Plant-based Recipes by Angela Liddon who offers an entire index of her recipes free over at oh she glows. When I’m extra motivated, I cook from Everyday Happy Herbivore by Lindsay S. Nixon. I’ve also found her subscription service over at Meal Mentor helpful. 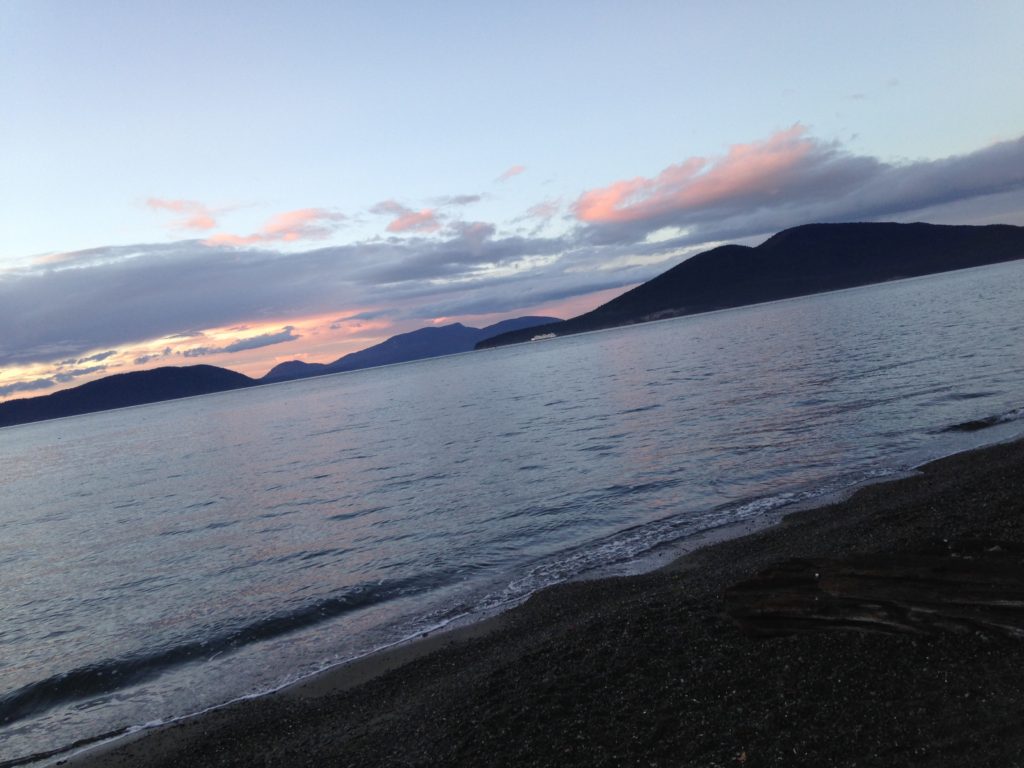 We spent four years living in the San Juan Islands, renting on five acres of peace and quiet . . . then we moved to the mainland in Washington State. The adjustment challenged me. It’s hard enough to focus my A.D.D. addled brain without adding in all the neighborhood noises. As I type this post, a house across the street is being demolished and taken away load by load in dump trucks. Last summer’s neighborhood expansion meant nonstop trucks filled with gravel driving by all the live long day.

Cosmo (pictured below) turns into Cujo every time a delivery truck drives by or someone comes to the front door – constantly jolting me out of my train of thoughts. 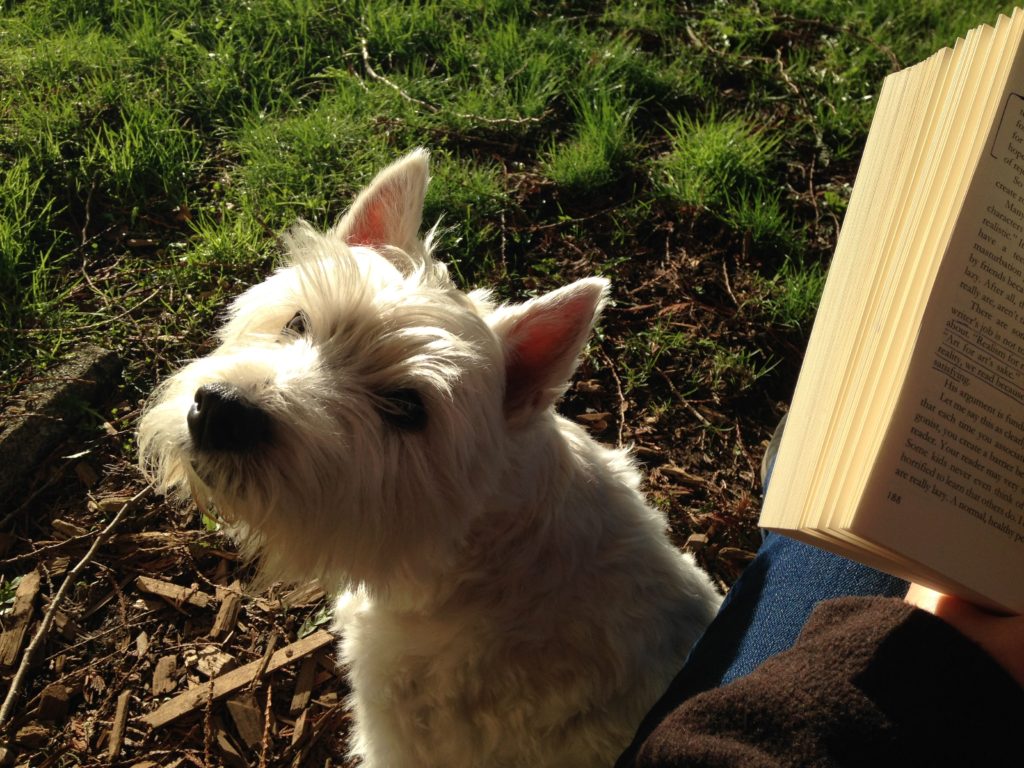 I’ve had to go ninja, Jedi mind master. Laser focusing on writing. There is only the story. Everything else fades into the background. It can be done! The best tip/trick is single tasking. Once you jump over to social media or look something up online, you’re done. Save marketing and online engagement for a separate session. When you’re writing, write. There is only the story.

Since music is a huge help for so many people, I wanted to share some personal recommendations. I can’t listen to anything with words while writing my own words, but musical scores and soundtracks have several key benefits of covering external and internal noise, and evoking emotions that bring you into the scenes you’re crafting.

While typing this post, I’m listening to one of my favorite Amazon Prime soundtracks: Scores for Focus.

Other favorites include: The Shannara Chronicles, Harry Potter, Lord Of The Rings, The Hobbit, and Game Of Thrones. 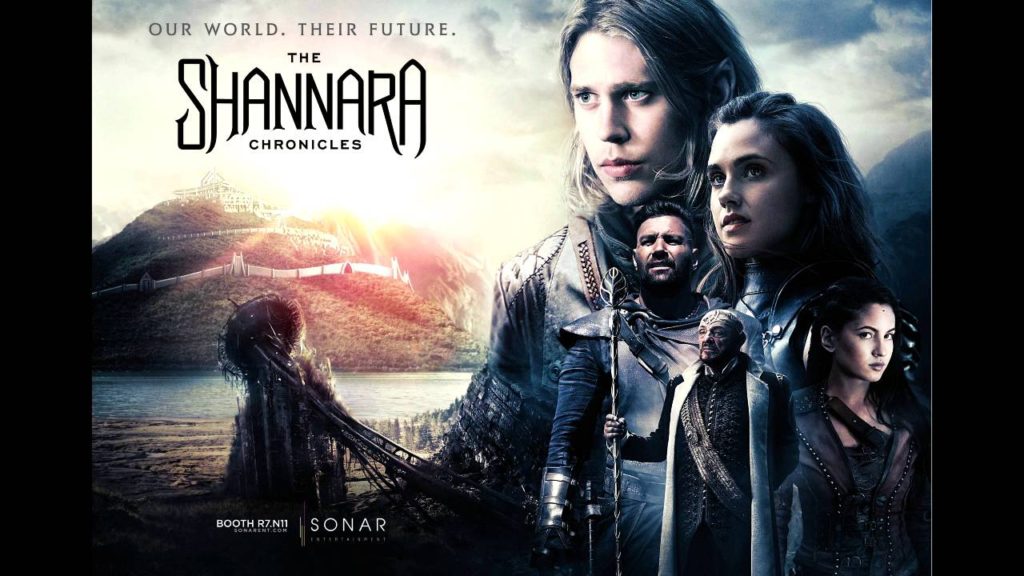 Finally, HAVE FUN! Remember to look up from your phone and enjoy the beauty all around. Experience this miraculous thing called life. Be kind to others. Connect with humans face-to-face. Get your heart pumping by stepping outside your comfort zone.

It all goes by in a flash. Set aside your self-doubts and enjoy every second you can! 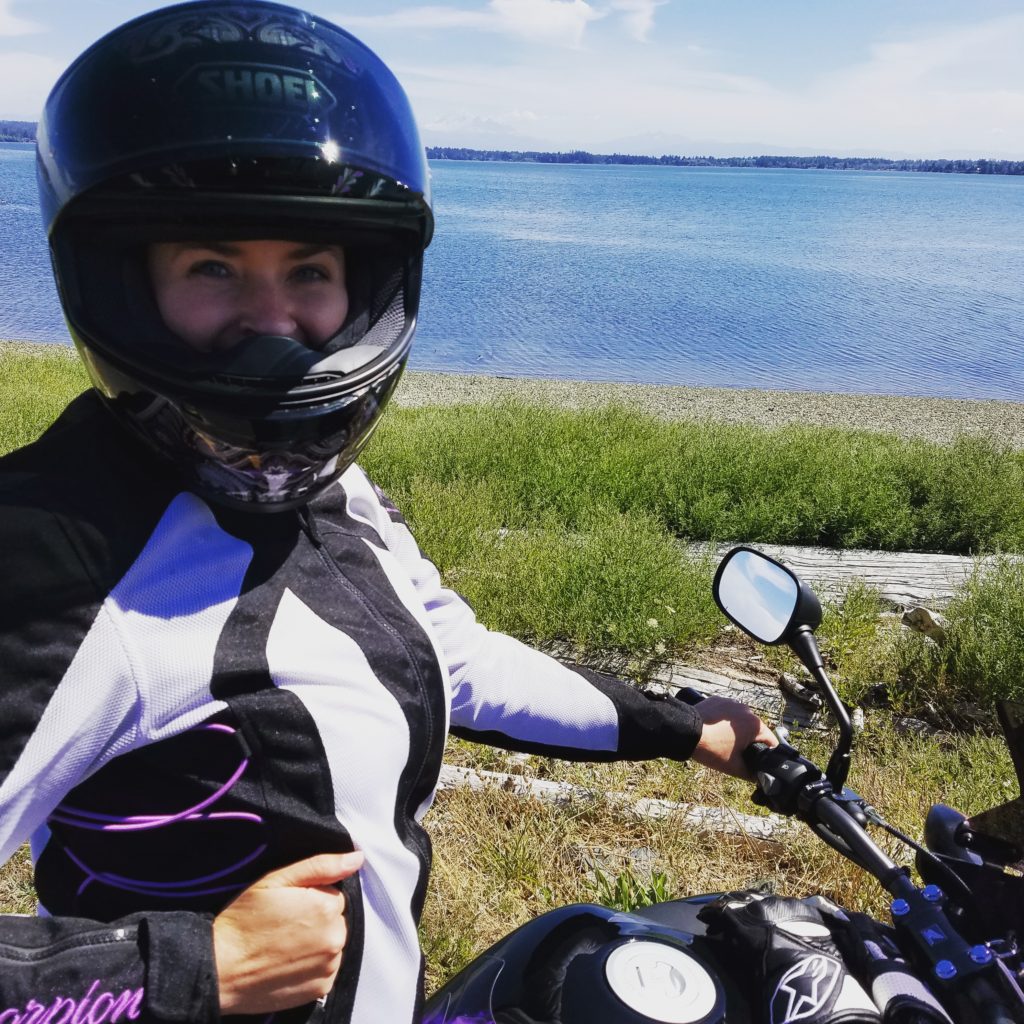